A new CNS active drug and its metabolite: a population pharmacokinetic analysis

Objectives & Background: A population pharmacokinetic (PK) model for a new CNS active drug in clinical development and its metabolite was to be developed based on data from four phase I (healthy as well as renally impaired subjects) and two phase IIa studies (target population). The model development should also include an initial screening for covariates that might influence the PK characteristics of the drug and/or its metabolite.

Results: Plasma concentration-time profiles (PCTP) were best described by a two compartment model for the parent compound as well as for the metabolite. 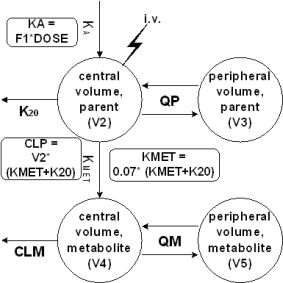 Metabolic formation was accounted for by a transfer constant (KMET) between the central volumes of both compounds. KMET was fixed to a value reflecting the recovery of the metabolite in urine (7%). Interindividual variability could be included for CLP, CLM, V2, V4 and F1. The estimates for parent drug and metabolite revealed large volumes of distribution and low clearances resulting in long half-lives. The initial covariate screening suggested that sex on F1 has a significant influence on the PCTP which warrant further investigations.

Conclusion: A population PK model has been successfully developed describing the plasma concentration of the parent compound and its metabolite. Influence of covariates will be further evaluated in a larger number of patients presumably exhibiting wider distributions of covariates. The model developed can serve as a tool to simulate and evaluate different dosing regimens for further trials for the drug under development.